When it comes to my running, no principle holds truer than inertia - "a property of matter by which it continues in its existing state of rest or uniform motion in a straight line, unless that state is changed by an external force."

Since completing the half at the 2014 Columbus Marathon, my matter has existed in a state of rest with only 100 miles and 27 records worth of running in seven months.

My alarm always rings with a heavy clang as May approaches June and the 16-week training cycle for the Columbus Marathon nears.

However, this year, my father was the external force that put this resting body back into motion with a single question and a follow-up remark.

"Are you still running?" he asked as he poked at my gut. "You better watch it or you're going to look like me in 20 years."

No, I mean it. I really, really mean it. 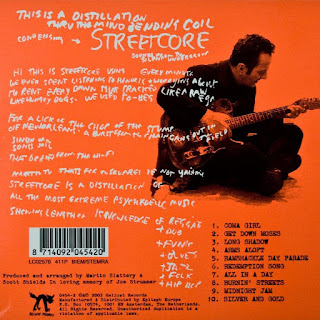 Joe Strummer & The Mescaleros Streetcore (2003)Released almost a year after his sudden death at age 50, Streetcore stands as a fitting finale for the Clash frontman and founder. Even if the rest of the record weren't outstanding, it would be worth having just for the intro to Midnight Jam when Strummer says, "This is London calling. This is London calling ... calling ... calling."

The only versions better than his cover of Bob Marley's Redemption Song are the original and his duet with Johnny Cash that appeared on The Man In Black's Unearthed collection.

New Morning doesn't rate as one of Dylan's deepest collections, but certainly among his most easily enjoyable. It's a collection of love songs and random reflections sung through a clear throat and a distinctive nasal twang.

He asks the question, "If dogs run free, why not me?" And, The Man In Me hits an additional strike for becoming a central song in The Big Lebowski.
Running Data for Thursday, May 14:3.17 Miles35:38Additional New Morning Candidates For Columbus Marathon Soundtrack: Went To See The Gypsy, If Dogs Run Free, New Morning, Sign On The Window, One More WeekendTotal 2015 Miles: 53.51 Miles

Rolling Stones No Security (1998)
Recorded on the 1997-98 Bridges To Babylon Tour, No Security offers a series of concert takes on numbers not normally featured on the Rolling Stones live set cycle with an always welcome shot of Gimme Shelter as the exception.

Even without the security of their most beloved live titles, the Stones make the music magical.

They're a world away from being sorry for not taking out the trash and still come through with three of their seminal songs - Alex Chilton, Skyway and Can't Hardly Wait.

Those alone will keep the rock 'n' roll children by the million singing, "I'm in love. What's that song? I'm in love with that song."