With Ike Reilly, You Always Want To Belong To The Staggering Evening No Matter Where It Takes You

Ike Reilly has got game.

The kind of game that attracts all the girls and makes all the boys wish they could be just cool enough to carry his amp.

He writes. He sings. He plays guitar.

THE party follows him no matter where he goes.

He tells toxic tales that are so unbelievable that they can't be true, but the details are so vivid that they just might be.

We Belong To The Staggering Evening (2007) is the sixth entry in his now nine-record catalog with the release of 2015's Born On Fire.

His 2001 debut, Salesmen And Racists, made him a NPR star. If there were justice in rock 'n' roll, it would have made him the biggest star of the new musical millennium.

Reilly cooks up a cosmic stew that combines rock and punk with hints of hip hop, acoustic with electric, the psychedelic and a dash of Link Wray.

He masters the combined cadence of rap and Dylan on Highway 61 Revisited, spitting image after image after intoxicating image in a Midwestern nasal twang.

On The Staggering Evening, there's the 4th of July with accelerants and amphetamines, a border bash with a Suicide Girl, and a union uprising that asks the question: "Who says you can't toss a fish at a president, say you're sorry and be on your way?"

Hunter S. Thompson would have loved Ike Reilly and you should too.

Running Data for Sunday, June 21:
5.26 Miles1:02:00Additional We Belong To The Staggering Evening Candidates For Columbus Marathon Soundtrack: 8 More Days To The 4th Of July, When Irish Eyes Are Burning, Valentine's Day In Juarez, Fish Plant Uprising, It's Hard to Make Love To An AmericanTotal 2015 Miles: 122.10 Miles
Posted by 765 at 33 RPM at 6:46 PM No comments:

Willie Nelson may have passed 80, but his 2014 Band Of Brothers collection proves he has no interest in slowing down or doing it any differently than "The Willie Way."

He's equally sensitive, silly, stubborn and really doesn't care what anyone thinks. He's a songwriting, guitar-playing rascal who just keeps moving down the road finding friends, fans and lovers wherever he goes.

On Band Of Brothers, nine of the 14 songs are Willie originals co-written with producer Buddy Cannon of Kenny Chesney production fame.

Few can sandwich a romp like Wives And Girlfriends between two love songs such as Whenever You Come Around and I Thought I Left You and sound equally sincere on all three.

No matter how many miles and faces he's left behind, there's no sign of him quitting any time soon.

"We're a band of brothers and sisters and whatever
On a mission to break all the rules."

As he sings and strums on the closing number, "I've got a lot of traveling to do."

Good for Willie and even better for us.

Running Data for Sunday, June 14:6.01 Miles1:10:17Additional Band Of Brothers Candidates For Columbus Marathon Soundtrack: Bring It On, Wives And Girlfriends, The Git Go, Band Of Brothers, Hard To Be An Outlaw, Crazy Like MeTotal 2015 Miles: 116.84 Miles

Jackson Browne's voice and songs are as comfortable to put on as a favorite pair of Birkenstock sandals in the summer.

The Next Voice You Hear: The Best of Jackson Browne (1997) should be more correctly dubbed a career retrospective than a greatest hits package.

For many, Running On Empty has become a greatest hits package all its own and it's safe to assume most buying The Next Voice You Hear probably have a copy in at least one format or another. But, it's a stretch to call a record "The Best of Jackson Brown" and not include The Load-Out/Stay.


The "extras" on this do include the unforgettable Somebody's Baby which appeared before only on the Fast Times At Ridgemont High soundtrack. It's impossible to hear without picturing Jennifer Jason Leigh as Stacy Hamilton.

The other two previously unreleased cuts are The Rebel Jesus - a Christmas song with a twist "from a heathen and a pagan" - and the title track.

The chronological order of songs demonstrates Browne's enduring commercial strength and shows off his continuing progression of hits.

Regardless of what's missing, the next voice that you hear will be probably your own singing along with no lyrics sheet needed.

Running Data for Saturday, June 13:4.18 Miles48:00Additional The Next Voice You Hear Candidates For Columbus Marathon Soundtrack: Doctor My Eyes, Fountain Of Sorrow, Late For The Sky, The Pretender, Somebody's BabyTotal 2015 Miles: 110.83 Miles
Posted by 765 at 33 RPM at 9:55 AM No comments:

Angaleena Presley is the last of the Pistol Annies trio (Miranda Lambert and Ashley Monroe) to shoot for solo gold and she finds it with the sensitive and sincere American Middle Class (2014).

American Middle Class is more reminiscent of solo Monroe than Lambert and a close cousin to Brandy Clark's 12 Stories.

Presley provides her own take on economic hardship, unplanned pregnancy and finding fun in the land of "dry county blues." 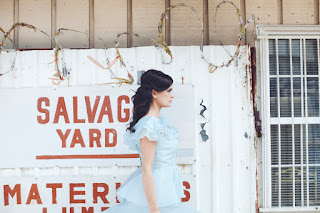 "Not a beer joint in sight/Half the county's laid off/Laid up a gettin' high."

Dry Country Blues leads to Pain Pills which becomes Life Of The Party and its walk of shame right into being Knocked Up.

This sobering and unsober circle of life leads to the conclusion that it might be better to turn politically red to escape: "'Cause a blade of bluegrass left a scar on my neck/And it ain't quit hurtin' yet."

Amid all the pain, Presley's characters may be ready to Surrender, but never give up all of their hope.

Mix equal parts Stones and Ramones with Cash and Clash to create the explosive punk rock that is Social Distortion.

Their 1990 self-titled classic did for them what Tim did for The Replacements.

It's now 25 years old and Social D. is playing it in its entirety on this summer's six-week concert tour with Nikki Lane and Drag The River.

It packs all the power of its predecessors - Mommy's Little Monster and Prison Bound - with a more polished sound that was friendly to the early-90's "alternative radio" and MTV.

The "Big Four" of the Social Distortion collection remains Story Of My Life, Sick Boys, Ring Of Fire, and Ball And Chain. The Social D. version of Ring Of Fire still burns the brightest of all the Johnny Cash covers out there and that's no small feat.

The remaining six cuts are just as juicy - So Far Away, Let It Be Me, It Coulda Been Me, She's A Knockout, A Place In My Heart and Drug Train.

Each song benefits from Mike Ness' sincerity and lyrical authenticity, packaged with a big guitar sound.

High school still seems like a blur and with Social Distortion we'll keep dreaming of that rock 'n' roll weekend.

Dylan Leaves Blood On The Tracks; Rolling Stones Let It Bleed And Shine A Light Live For Documentary

I don't know if Blood On The Tracks (1975) is Bob Dylan's greatest album of all time, but I'm certain it's my favorite.

The opening Tangled Up In Blue rates as the storytelling centerpiece and the only single. As stories go, Lily, Rosemary And The Jack Of Hearts is nearly as captivating a tale.

Dylan's voice is clear and strong.

And, in times of absurdity, it's nearly impossible to pick a favorite put down from Idiot Wind.

Running Data for Sunday, May 24:

4.15 Miles46:45Additional Blood On The Tracks Candidates For Columbus Marathon Soundtrack: Simple Twist Of Fate, Idiot Wind, You're Gonna Make Me Lonesome When You Go, Shelter From The StormTotal 2015 Miles: 76.66 Miles

Rolling Stones Let It Bleed (1969)
Let It Bleed marks the end of the Brian Jones era and the beginning of the Mick Taylor period.

Gimme Shelter, Midnight Rambler and You Can't Always Get What You Want became Stones live staples in nearly every show since, while Love In Vain, Live With Me, Let It Bleed and Monkey Man remain concert surprises every time they're included.

Running Data for Monday, May 25:3.76 Miles42:53Additional Let It Bleed Candidates For Columbus Marathon Soundtrack: Let It Bleed, You Got The Silver, Monkey ManTotal 2015 Miles: 80.42 Miles

Rolling Stones Shine A Light (2008)
Shine A Light teams the "greatest rock 'n' roll band of all time" with one of the greatest directors of all time, Martin Scorsese, for a documentary chronicling the band's five decades.

This two-disc live set is taken from a pair of 2006 shows at New York's Beacon Theatre on the Bigger Bang Tour that includes all of the songs you would expect and several that don't often make it to the concert stage including Some Girls, She Was Hot (from Undercover), You Got The Silver, Connection and I'm Free.

All three of the guest shots - Jack White on Loving Cup, Buddy Guy on Champagne & Reefer and Christina Aguilera on Live With Me - are memorable without feeling forced for special effects. Surprisingly, Aguilera takes the top cameo award.


Running Data for Wednesday, May 27:4.08 Miles47:15Additional Shine A Light Disc 1 Candidates For Columbus Marathon Soundtrack: All Down The Line, Some Girls, Champagne & Reefer, You Got The SilverTotal 2015 Miles: 84.50 Miles

Steve Earle Rides Down The Blues Highway In His Terraplane, Lonesome And The King Of Loves Lost

I have 22 of his albums and seen him live three times, twice with his most recent wife Allison Moorer.

I know her too.

Her sister Shelby Lynne and sometimes singing partner Lonesome Bob introduced us. Same thing, buy music by one person and end up running down the road with some of their friends.

Two of the three times I saw Earle, Moorer was with him - once by herself and once as a member of the Dukes (& Duchesses). When it came time for her introductions, Earle flashed a devilish smile and seemed just as surprised as many in the audience that she agreed to be a co-star in his seventh trip down the wedding aisle.

The two split in 2014 and Terraplane (2015) is Earle's first musical outing since. It's a full-on blues ride that references "Ol' Bob Johnson" and pays tribute to his mentor's (Townes Van Zandt) mentor (Lightnin' Hopkins).

Earle writes in the liner notes, "For my part, I've only ever believed two things about the blues: one, that they are very democratic, the commonest of human experience, perhaps the only thing that we all truly share and two, that one day, when it was time, I would make this record.

"And it's time. Hell, everybody's sick of all my fucking happy songs anyway."

It's impossible not to think of this as a "divorce record." But, for all his admissions of being "better off alone," Terraplane roars happily along for most of the 11 songs.

Earle "ain't nobody's Daddy anymore," but that doesn't mean he's having any problems finding company no matter how temporary, at least according to Baby Baby Baby (Baby), You're The Best Lover That I Ever Had and The Usual Time.

"I'm acquainted with the wind," Earle sings, "And me and him keep travelin' along."

Whether resigned to his singular fate or just not marrying material, Terraplane embraces his baggage and the blues.

"They ain't never made no love/I couldn't lose/I'm the last word in lonesome/And the King of the Blues."

I'm taking the Terraplane and headed to the record store for Moorer's Down To Believing. I gotta know what Allison has to say about all this.